Dedicated to her mother who passed away in 2018. “This record is for her.”

Los Angeles’ Katie Gately has announced her sophomore album, Loom, via Houndstooth, an elegiac reflection on the loss of her mother who passed away from cancer in 2018.

As the label explains, “At the time of her mother’s diagnosis, Katie was near completion of an entirely different album, but says that very quickly she realized she “didn’t have the bandwidth to make that record anymore.” She returned from LA to her family home in Brooklyn and started again, completely rebuilding the album around the track ‘Bracer’, which was her mother’s favorite.”

Hear the enormously emotive and careening avant-garde ballad below, accompanied by visuals from Brian Cantrell.

Gately is known for her unique approach to field recording and handfuls of banal-made-strange samples, chosen for their “associative power,” add their odd timbres to the record. These include sounds of screaming peacocks, shaking pill bottles, a closing coffin, howling wolves, a shovel digging, a paper shredder, heavily processed audio from her parent’s wedding and a real earthquake.

“I felt like my world was being shaken,” says Katie. “I was losing the person who created me, and it seemed an appropriate time to sample earthquakes.”

Loom follows her 2016 debut Color on Tri Angle as well as collaborations with Björk, serpentwithfeet and Zola Jesus.

Loom will be released February 14, 2020 and is available for pre-order now. See the artwork and tracklist below. 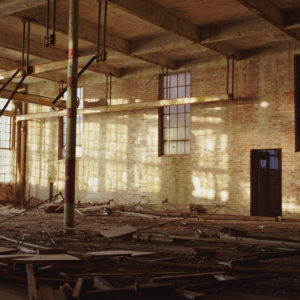